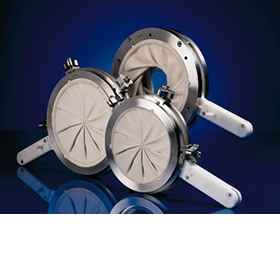 International Biotechnology Center (IBC) Generium, Volginskiy, Russia carry out their research and development of molecular and cell biology in the most stringent of Cleanrooms.

IBC Generium had a requirement to temporarily pass pipes through the walls of their Cleanrooms to help formulate their research.  Initially, IBC Generium used a multitude of seals to gland around the pipes. However, as they needed to install, change and replace a seal every time they passed a pipe through or removed it from their cleanroom wall, they soon realized they were wasting valuable hours every time this procedure needed to be carried out.

IBC Generium required a device, which would quickly seal around any pipe diameter, to reducing downtime and increase productivity.  In addition, when the pipe is removed, the gap in the wall would be closed off, thus keeping the room clean and dust free.

The Mucon Series K Quick Release Iris Diaphragm Valve quickly proved to be a major improvement at their laboratory. This is because the Iris Valve can quickly and easily control the seal and tightly gland around any pipe diameter. No time is lost changing individual seals and should they want to remove a pipe to close off the hole in the wall, they can simply shut off the valve thereby preventing any ingress into the cleanroom. As a result hours, which they once wasted, have become increased hours of productivity and their task of installing and removing utility pipes into the cleanroom is made easily and quickly.